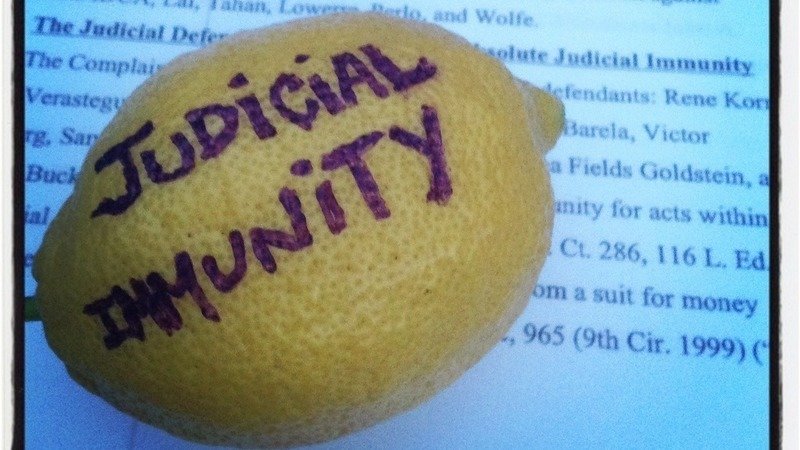 Article III Section 1 of the U.S. Constitution states: The Judges, both of the supreme and inferior Courts, shall hold their Offices during good Behaviour (emphasis added), and shall, at stated Times, receive for their Services, a Compensation, which shall not be diminished during their Continuance in Office.

In only two circumstances is a judge not immune from liability:

(1) for nonjudicial actions; and

(2) for actions, though judicial in nature, taken in complete absence of all jurisdiction.

Prosecutorial Immunity applies to the decision to prosecute a particular case; “This immunity covers the knowing use of false testimony at trial, the suppression of exculpatory evidence, and malicious prosecution.”

An act done in complete absence of all jurisdiction cannot be a judicial act.

“It is no more than the act of a private citizen, pretending to have judicial power which does not exist at all. In such circumstances, to grant absolute judicial immunity is contrary to the public policy expectation that there shall be a Rule of Law.”

Application of immunity to judges who admitted under oath to engaging in a criminal scheme that lasted for years would indeed be “monstrous.” [Quoting Judge Learned Hand in Gregorie v. Biddle, 177 F.2d 579 (2d Cir. 1949)] To find immunity would denigrate the respect of the public for the judiciary, which is dependent upon judges making decisions based on the law and the facts, rather than personal, corrupt motives.

Whereby; the Tenth Amendment states: The powers not delegated to the United States by the Constitution, nor prohibited by it to the States, are reserved to the States respectively, or to the people.

We The People, hereby ask Congress to create a subcommittee to investigate and address the flagrant abuses of Judicial Immunity and Bad Behavior rampantly exerted by the Judicial Branch under the Color of Law.

Judicial Immunity is one of the reasons we are experiencing so much legal corruption. As long as judges are not accountable for their decisions as judges, the door to corruption is wide open, with many evil souls walking through.

“We hold these truths to be self evident, that all men are created equal” There are no out clauses, not even the judges. If I engage in corruption I am liable. If judges do, they are immune. How is that right by any standard other than evil? Now is the time to flush all forms of evil from our system. Know them by their fruits.

“That whenever any Form of Government becomes destructive of these ends, it is the Right of the People to alter or to abolish it, and to institute new Government, laying its foundation on such principles and organizing its powers in such form, as to them shall seem most likely to effect their Safety and Happiness.”

It’s time to restore integrity into our judicial system by holding the people responsible for the decisions that they make, just like any other citizen.